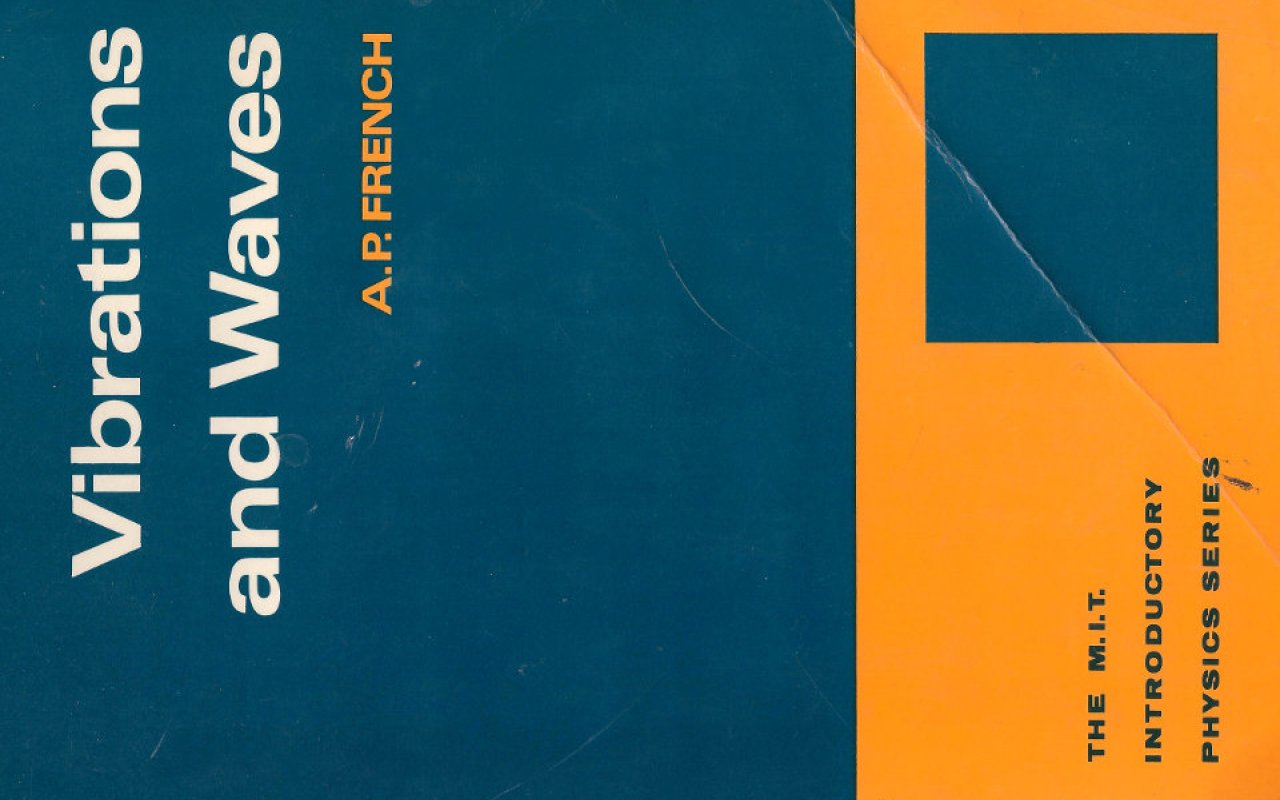 This paper was prepared for presentation for the 2011 ISEA conference in Istanbul. The following is slightly expanded with an 'influences' section at bottom, not included in the published version due to space restrictions.

I am an artist doing electronics handcraft by ear, tinkering intensively and intuitively in the studio. This paper discusses my current work Vibrations and Waves, an ongoing series of experiments about sound and resonance. [1] Along the way, the paper introduces some working methods in my studio practice.

Vibrations, waves, and therefore sounds, occur when machines do what they are built to do: wires hum, motors whir, gears grind, and metal clangs. In this sense, sound is a natural by-product of all machine activity, even if it is not always the intended output. Where utility is the primary consideration, these vibrations tend to be ignored or actively suppressed. [2] Mechanical systems in which oscillations are desirable include musical instruments and certain types of sound-based artwork.

In Vibrations and Waves, notions from intentionally sound-producing machines are transposed onto ordinarily non-musical devices, and vice versa. Undesirable vibrations move from periphery to centre stage. The normal utility value of the machine becomes a secondary consideration, as it is regarded through the lens of musical practice and its elements such as pitch, harmony, and rhythm.

By revealing the basic physical magic within our everyday machines, structures and systems, I wish to show that they are subject to material laws that are fundamentally mysterious and outside of our absolute command. This elusive magic is a worthwhile reminder that we are not in total control in a digital-technocratic world where total control seems to be a goal.

My interest in sound and resonance was sparked by an accidental discovery made while working in the studio. [3] A project required a silent rotating mirror. The natural vibrations of the motor were physically amplified by the spinning glass, and I tried all kinds of things to muffle the sound. After a long day and a very late night I gave up without success, and let the motor spin away undamped.

I stared at the running motor for quite some time while listening to its drone. Slowly, the annoying noise transformed into a compelling, and even beautiful sound. In my over-tired state, the motor seemed to be singing to me. There was a provocative contrast between the dirtiness of the unadorned device and the surprisingly elegant sound issuing from it. With scrap glass and a salvaged industrial printer motor as my unlikely revelators, I realized that I was experiencing the phenomenon of resonance.

Eventually this project became an installation in which a dozen rotating sheets of glass fill a room with powerful, singing tones. Entitled Stepper Motor Choir (2008), this was my first sound-based work and the precursor to Vibrations and Waves.

All things have a natural resonant frequency. This intriguing idea suggests a baseline connection between just about everything, but I will keep to the physical for now. The metal body of my 1981 Econoline van would vibrate intensely when reaching certain resonant speeds. Our bodies have resonant frequencies. As does the stapler on my desk, as do skyscrapers, bridges, tectonic plates...

The current public incarnation of Vibrations and Waves is a series of video documents, which I see as an extension of my sketchbook. Video provides a record of a temporary set-up, and helps me clarify vague ideas so that they can be communicated to others. Most of my experiments use a limited palette of basic tools and readily available materials. To create vibrating magnetic fields I use simple variable frequency oscillator circuits, rare earth magnets and cheap electromagnetic coils. These fields sonically activate things like scrap glass, metal objects, and tensioned wire. A full sheet of plywood cum work-table has served as a resonating and amplifying surface, and also as the main staging area for most of these experiments and their documentation.

The most fascinating sounds occur when the oscillator is slightly detuned from the materials' resonant points, and when multiple oscillators act simultaneously. In these cases, the slightly unbalanced system wavers at the edge of stability, like a tipsy tightrope walker attempting to find the centre of gravity. When left to run their course, these simple initial conditions give rise to complex and surprising results: shifting and shimmering harmonics, sudden crescendos and alternating rhythmic beat frequencies.

At one point, when leaning on the table to adjust something, I noticed that even a little weight would stretch the strings somewhat, altering their natural frequency. The effect is similar to, yet distinctive from, manipulating the electronics. I replaced the manual tuning element of the oscillator circuit with a photocell, so changes in ambient light would be reflected in the driving frequency. Modulating these variables adds to the complexity of the system. It becomes a kind of instrument that can be performed. I began to think of ways to automate this.

Machine _performers will converse with and manipulate these various elements: an animated pump system will use water weight to tension wires, slowly modifying sonic characteristics as it is displaced into different hanging containers; oscillators could change pitch based on ambient light levels, regulated by motorized dimmer devices and automated shutters.

Each _performer will hypnotically repeat simple tasks, at their own lethargic pace, independently, but simultaneously. They will combine for a cumulative effect that is subtly unpredictable and in continuous slow, fluctuation. By letting machines run the show, I hope to open up a temporary space for contemplative consideration of the forces at work in the environment around us. Connecting the visible and physical attributes of mass and light to the sonic intangibility of resonance is an exploration of the fundamental properties of the stuff the world is made of.

Mistakes and accidents such as the singing motor or leaning on the work table frequently shape the course of my artwork. They typically occur when I have met some kind of technical or financial limitation, or some material quirk asserts itself contrary to my aims. After much hair pulling, occasionally I realize that the unintended behaviour is interesting in itself. I drop the original goal and pick up a new path, letting it lead me along instead of trying to bend it to suit pre-determined criteria. Knowing how to read these hidden signposts as they reveal themselves is a crucial part of my process.

I look at what I make as the electro-mechanical equivalents of short stories. Naturally, every good story needs some tension to keep it going. In my machinic texts, I try to create tension by intermixing different systems. Organic ones blend with technological ones, the old with the new, and the handmade with the machine-made. And rather than words, sentences and paragraphs, I use bolts, batteries, metal, and custom electronics.

[2] Mechanical vibrations can sometimes even become a dangerous phenomenon. A frequently cited example is the 1940 collapse of the Tacoma Narrows bridge. Wind-generated reverberations transformed the structure into a rippling ribbon of concrete and steel, eventually leading to its self destruction. For footage and information see the Wikipedia article, (accessed July 10, 2011).

Influences (addendum)
There is an abundant history of artists and artworks using long, vibrating wires, a key element of Vibrations and Waves. What follows is a very incomplete list of inspirational examples.

Alvin Luciers 1977 Music On A Long Thin Wire involves a wire extended across a large room, into which is fed a varying, amplified sine wave. It interacts with a large magnet, “...creating a rich variety of slides, frequency shifts, audible beats and other sonic phenomena..."

Ellen Fullman has been creating her lifes work, the Long String Instrument, since 1981. The device comprises dozens of strings, each 50 feet long or more. Fullman walks through the instrument, brushing it with rosin-coated fingers “...producing a chorus of minimal organ-like overtones which has been compared to the experience of standing inside an enormous grand piano.”

Gordon Monahan has made extensive use of air and water currents to coax sound out of long piano wires. 1990s _Aquaeolian Whirlpool_ is an array of taut wires stretching from a high ceiling down into an artificial water vortex in a plexiglass column. The amplified turbulence-induced tones demonstrate “...that in many cases, water and air are interchangeable substances in the generation and transmission of sound.”

Gwen Boyle's 1994 project Arc centres on an inexplicable sonic-magnetic phenomenon tape-recorded during an Arctic residency. A 2002 incarnation is essentially an unrolled loudspeaker in which a long metal wire passes along a wall over several powerful magnets and experimental resonators of wood, metal and stone. Each end of the wire connects to the output of an amplifier playing the recording of the uncanny northern harmonics

Ken Gregorys 2009 wind coil sound flow is a large wooden structure that supports sail-like fabric resonators. Hand-wound electromagnetic coils activate tensioned wires. Inspired by the sound of a kite string accidentally brushing a cowboy hat, wind coil sound flow is another “poetic and kinetic representation of a sound speaker” that “...reproduces the processes involved in operating an Aeolian Kite Instrument in the field, a wind instrument based on an Aeolian harp.” 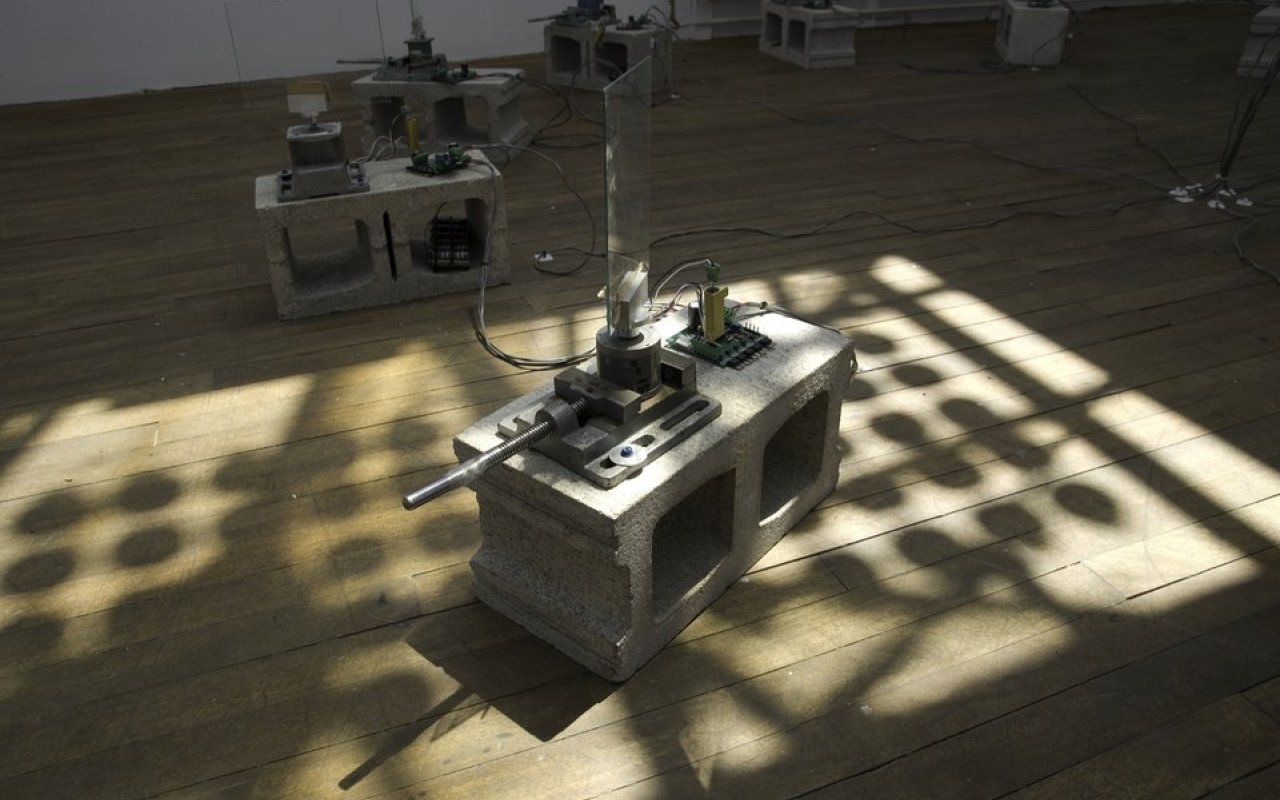 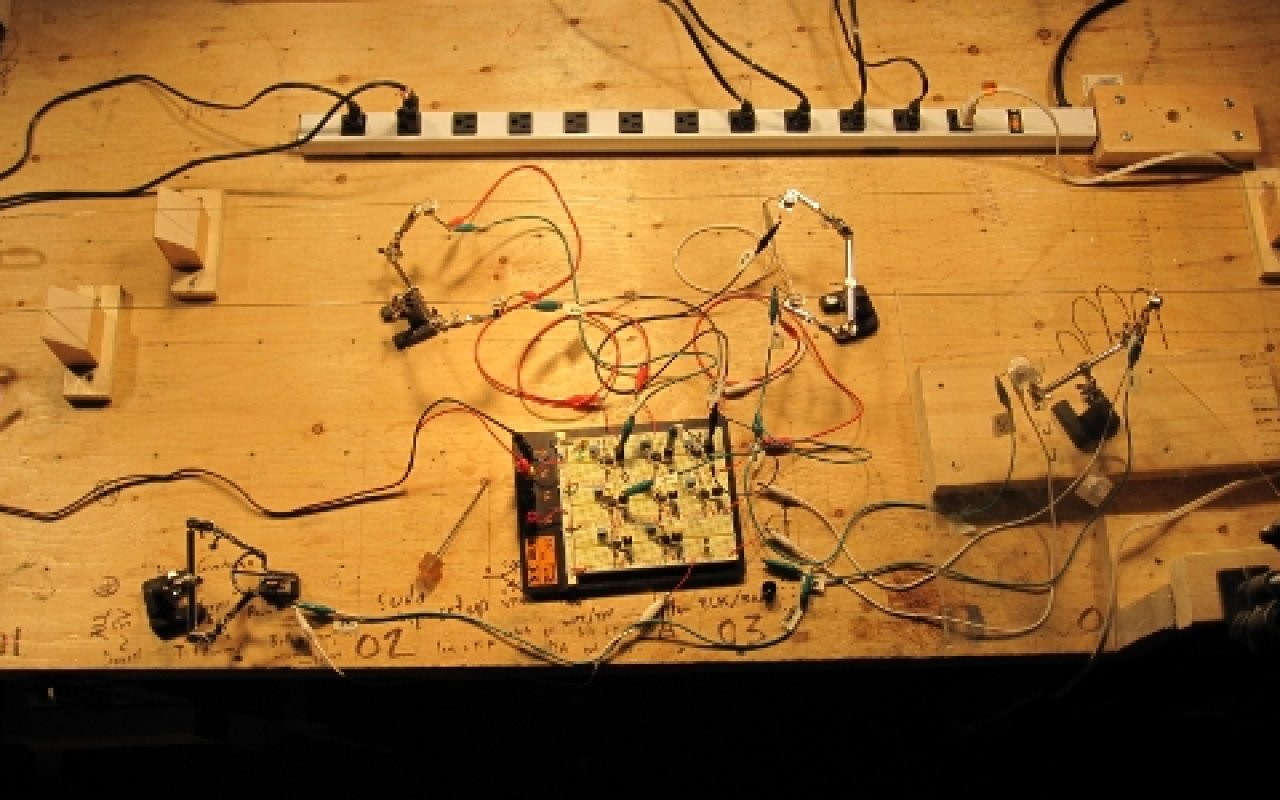 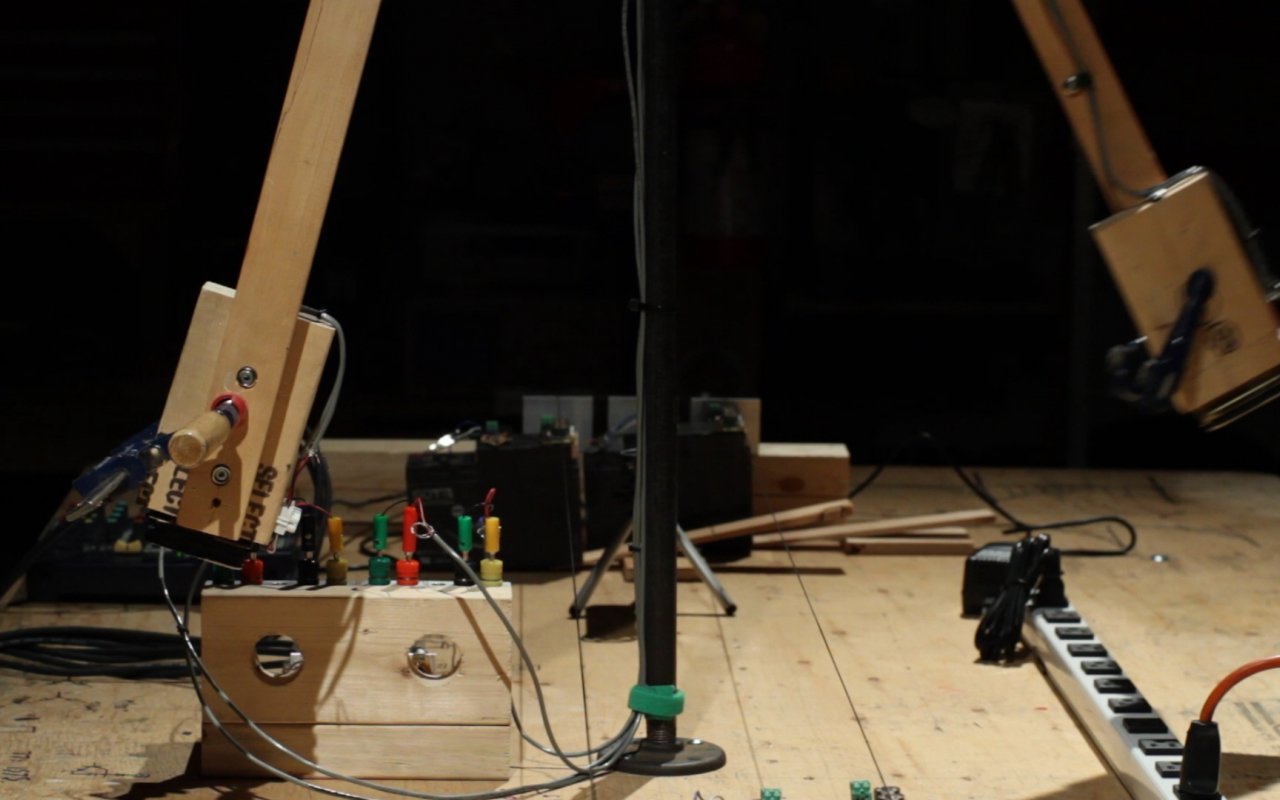 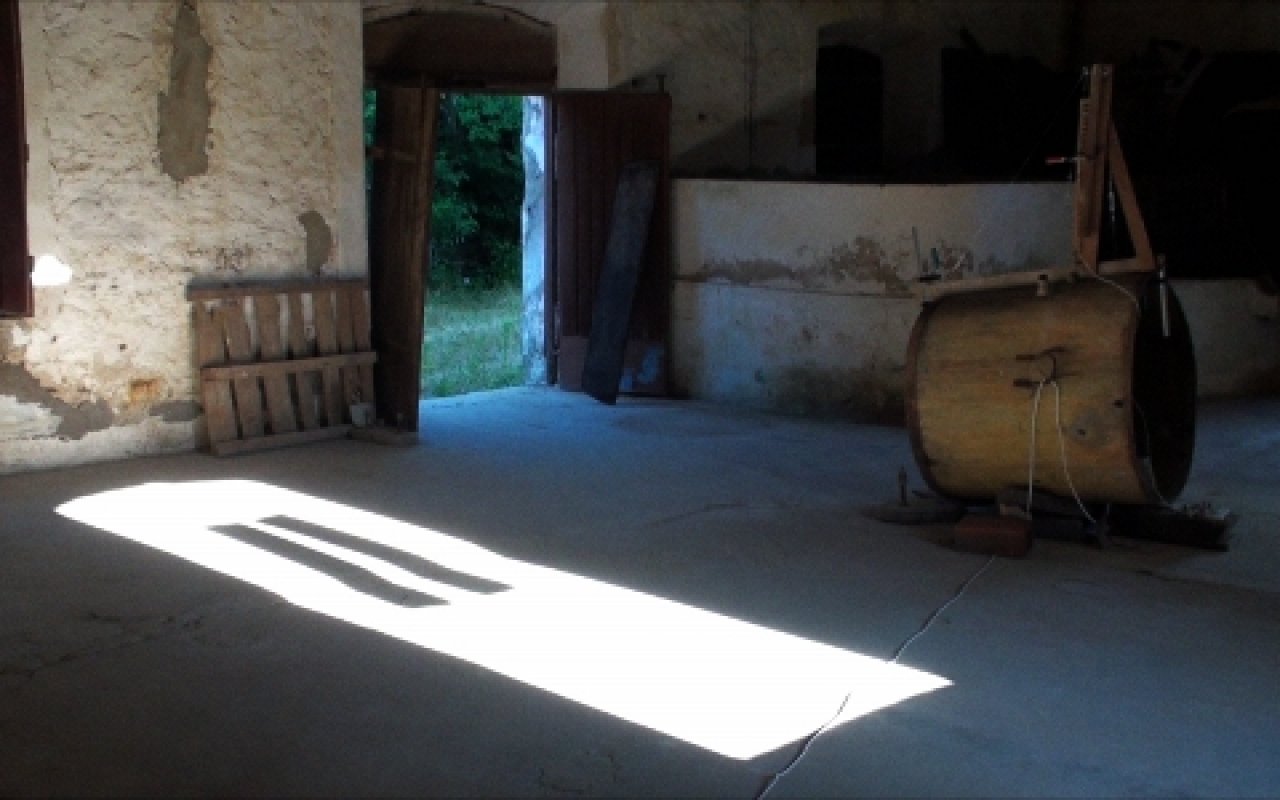 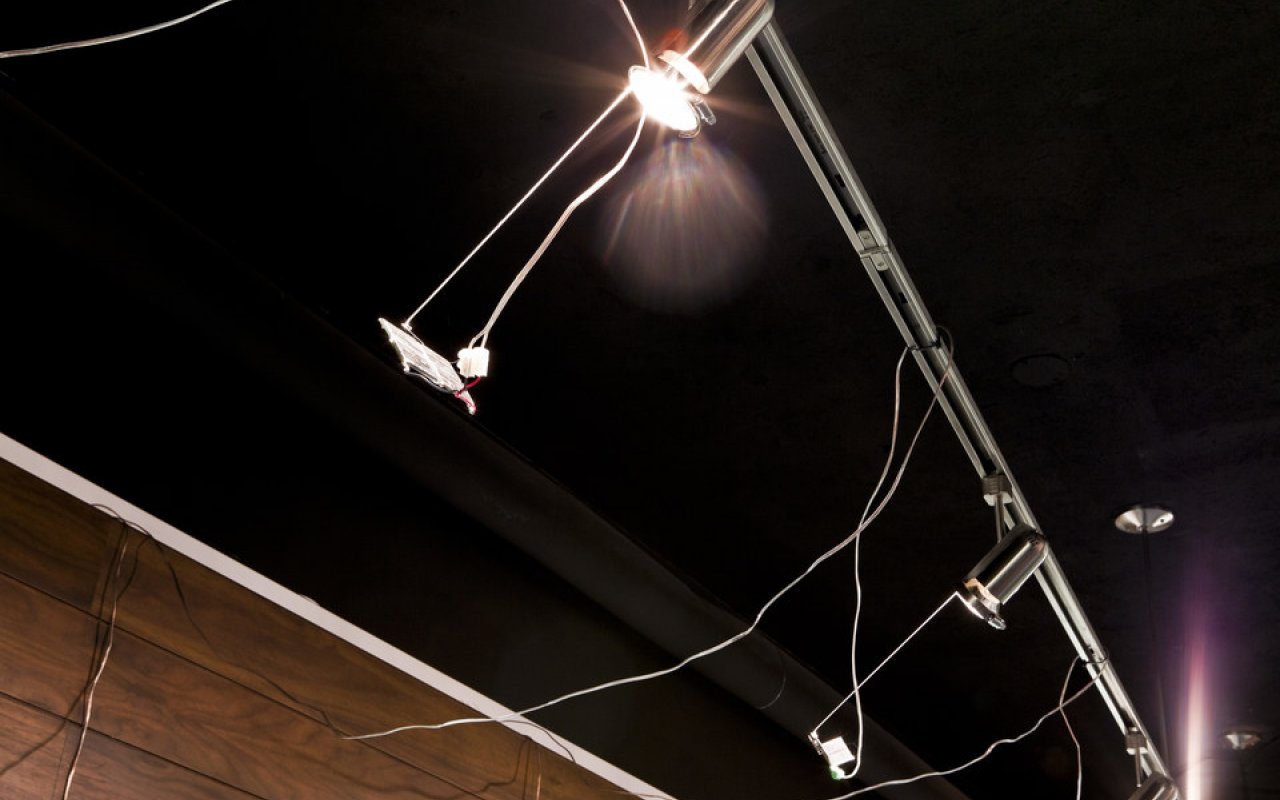 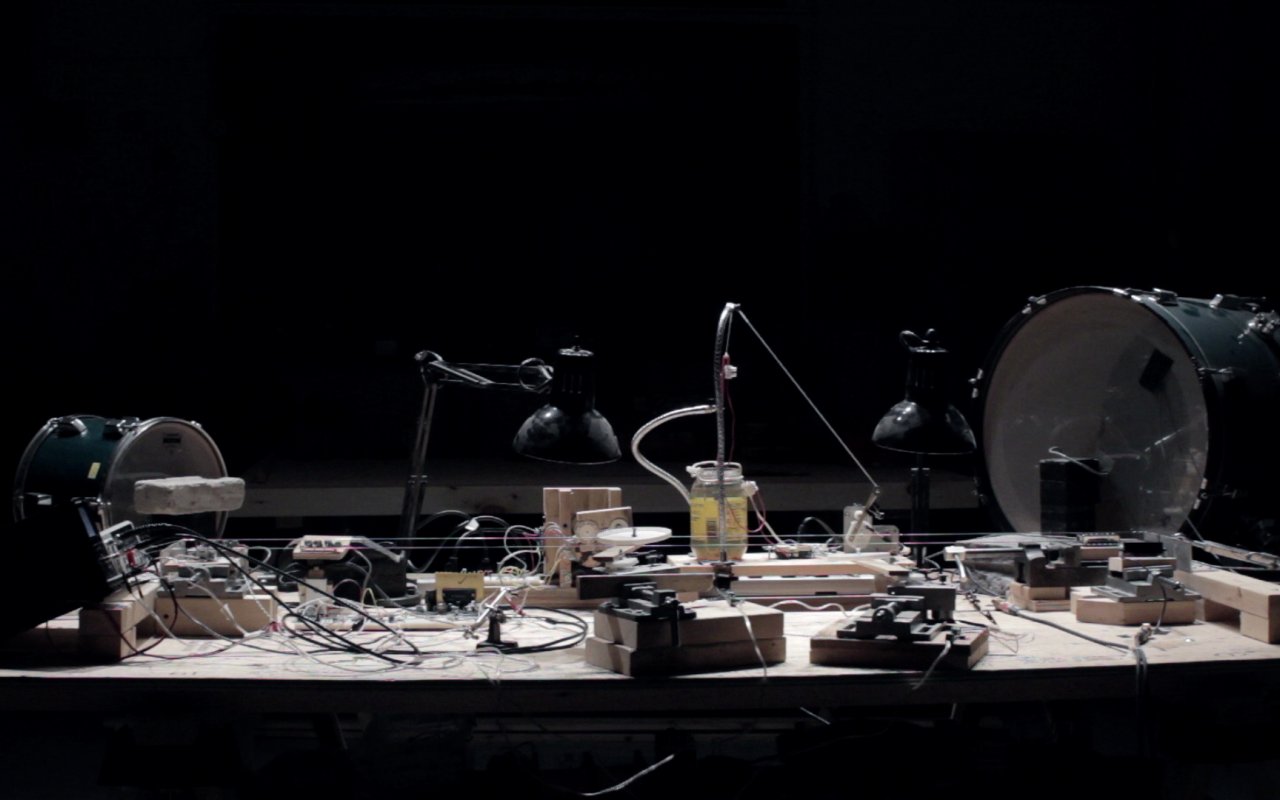 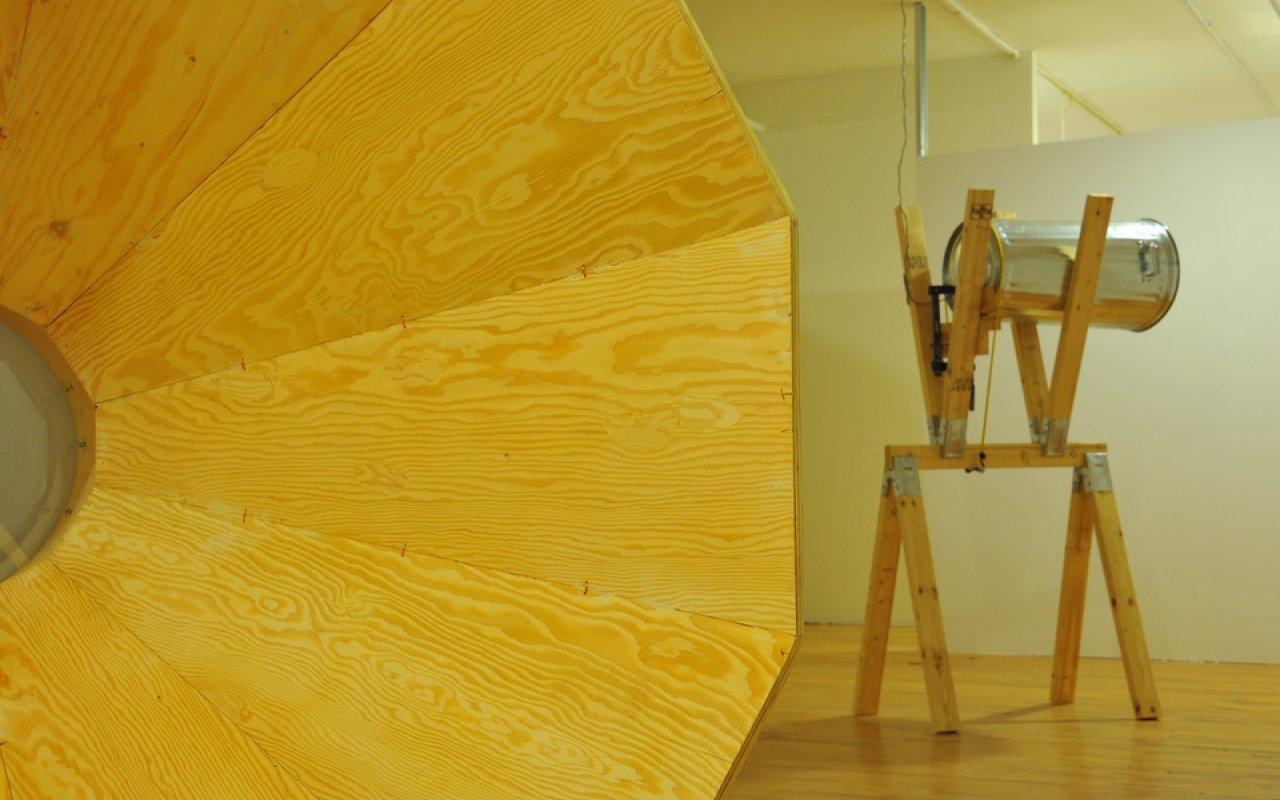 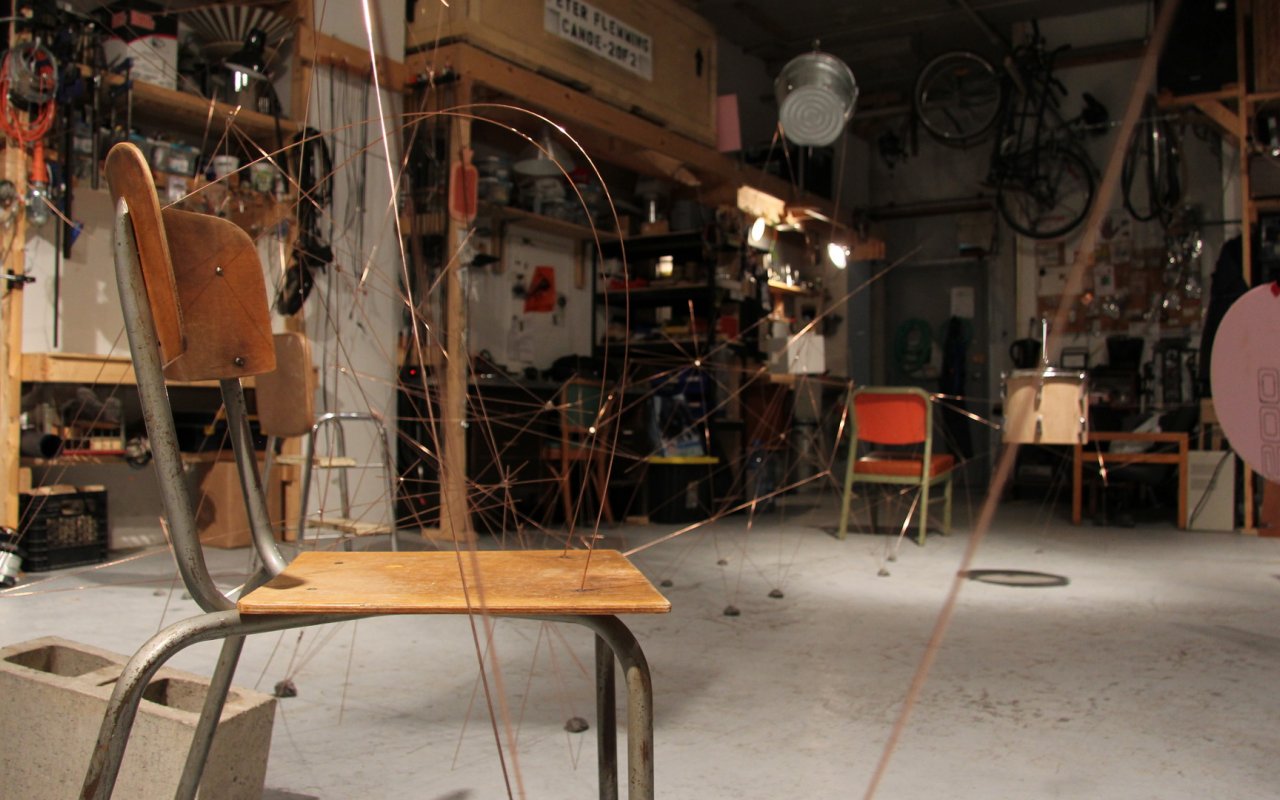 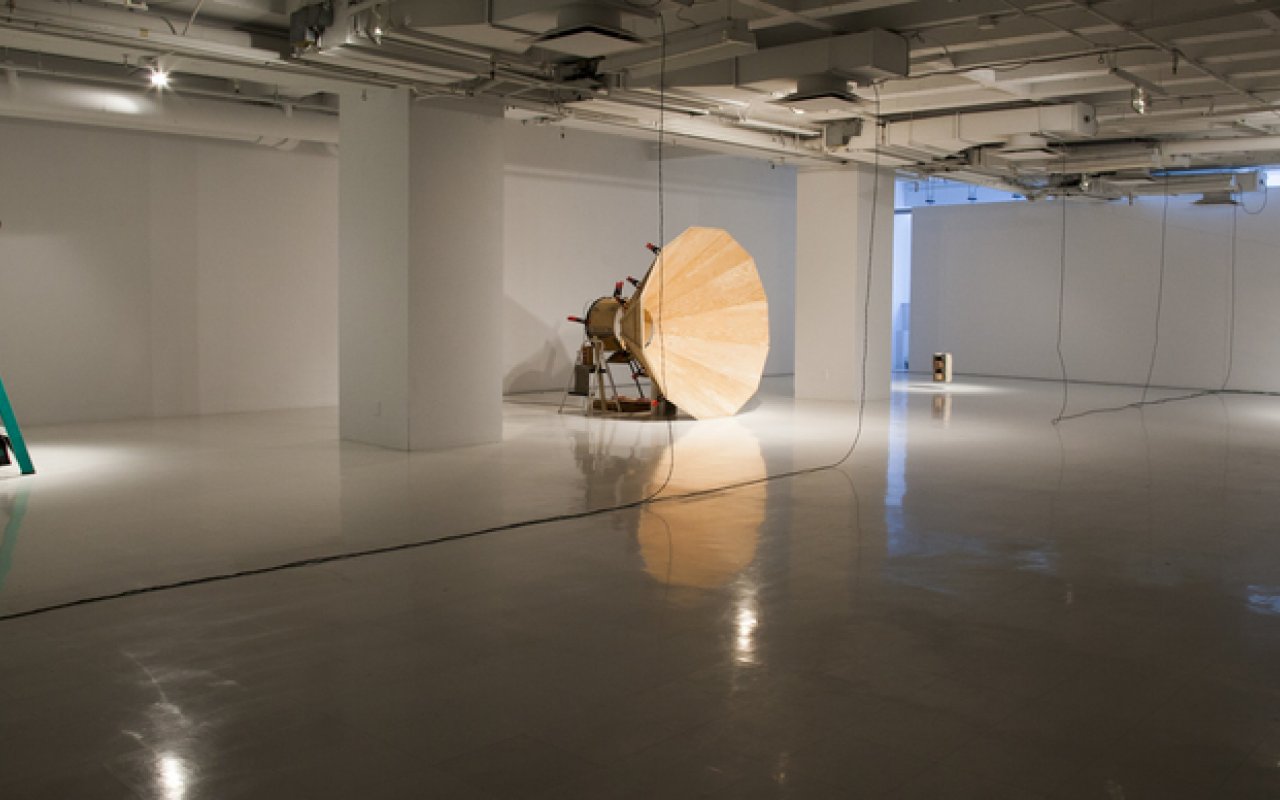 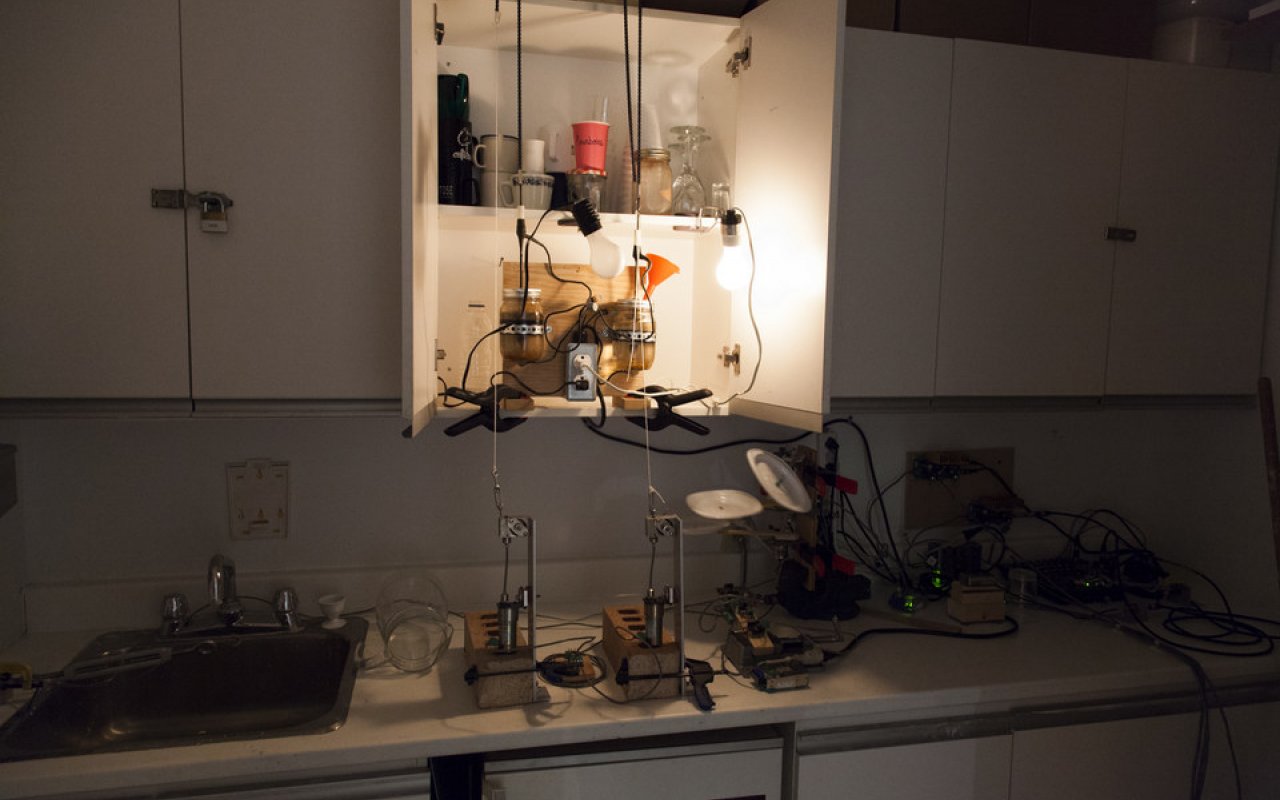